How can a French collective gather artists from all over the world to release an album and its videos, without ever having met each other!

This collective named DAMde8, born in 2019, based in Bordeaux (France), gathers about thirty people (artists and contributors from different countries).

Fifteen of these people have put into practice their skills and the principles of collaboration instilled by DAMde8. Today they present the album MAJOR JONES, sung by Major Kami and their guest, Sarah Jay Hawley from Massive Attack.

The challenge they set themselves for this electropop album, visited by the spirit of David Bowie, was to talk about his life without his name ever being mentioned in the lyrics.

Denis Expert began the compositions in 2020, on a corner of his dining room table, with a mini master keyboard, which allowed him to record everything on his computer, also composing the melodies he hummed in "yoghurt"(french expression used for the action of singing in fake english).

His friend Dan Burkhart, composer, arranger and sound engineer, came in to help.
Thanks to him, the sound and harmonic production took on a strong meaning.
The only thing left to do was to find a singer!

As Denis is constantly searching on social networks, he solicits several singers, but his choice quickly goes towards a female voice to avoid a "male competition" with David Bowie's voice.

After several unsuccessful attempts, and some abandonments, he hears the voice of this Canadian singer who lives in Singapore. Without knowing her, he suggested that she listen to the songs in yoghurt. She loved the theme he proposed.

Her real name is Camille Miller and she is involved as a writer.
For some of their songs, the lyrics come entirely from her (Burns in the Barns; Mystical Musical Maze...), or from him (Major Jones; Coco Dancing...).

From these songs, the participants seduced by this universe have blossomed

From these songs, the participants seduced by this universe have blossomed by creating visuals and videos. It is impossible here to mention the names of all the contributors who intervene in their field. You will find the link to their full bio mentioned at the bottom of the page. 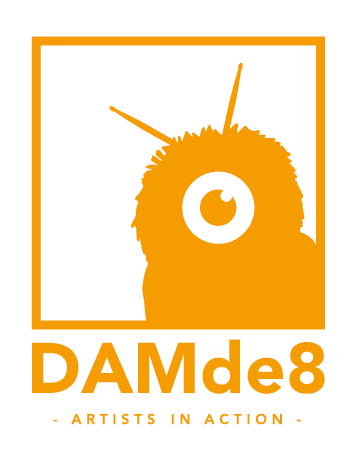 Sophia-Ines Klein : Transmission on the net